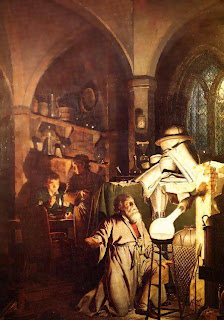 I will in this article and the following ones start summarizing my opinions based on Rick’s notes and the discussions in the workshop.

The entrepreneur is Alchemist of the modern world. Alchemist is the one who works in Alchemy and according to Wikipedia

“Alchemy is an ancient tradition, the primary objective of which was the creation of the mythical “philosopher’s stone,” which was said to be capable of turning base metals into gold or silver, and also act as an elixir of life that would confer youth and immortality upon its user”

An Alchemist endeavors to turn base metals into gold while the entrepreneurdrives to turn opportunities into successful business. This analogy between theentrepreneurs and alchemists is not only about gold or money it is about the drive to transform the low value into high value.

An Alchemist is committed to what he is doing and is stubborn to turn metals into gold, and the entrepreneur is the same as he is committed to bring his idea to reality and he is a great believer in his idea and stubborn in achieving it.

One of the skills the entrepreneur has is that he can look at positive things and find opportunities instead of barriers or problems and tries to overcome the barriers by utilizing new innovative approaches. This is the same with the alchemist who looks for every new way and tries different opportunities to get the gold.

Although the entrepreneur keeps trying different opportunities sometimes he succeeds and other times he fails, he learns from both the success and the failure and build experience from that and lead his ideas, team and new opportunities into better position. Failures are seen as speed bumps rather than barriers and encourageentrepreneurs to look for options in their approach. Alchemists historically were driven by the creation of gold.The byproduct of their experiments contributed to the humanity countless innovations that may never have been discovered. Alchemistslearned from their trial and errors and helped in the formulation of the science of chemistry we know today.

Alchemists faced lot of risks while trying their experiments which is similar what the entrepreneur faces every day in leading his ideas into success and market.

One of the hardest things in the world the entrepreneur tries to do which is harder than combining material to get gold, is creating win-win human relations.  Anentrepreneur is an alchemist at combining people together.

Finally, alchemists are crazy as are most entrepreneurs. Both are driven by what could be rather than being limited by what is and has been. This helps them in introducing innovative solution by not thinking as the rest of the others, asInnovation comes from creative with persistence.

To summarize entrepreneurs have the following characteristics: